Another day and there’s another story in the Catalan media on Ajax’s Matthijs de Ligt and Frenkie de Jong.

The front page of Friday’s edition of Mundo Deportivo claims the Netherlands internationals ‘wait for Barca’ as they believe the Catalan club’s style of play would suit them very well.

The defender and midfielder are on the radar of several top clubs across Europe, including the La Liga winners, as they are marked as priority objectives.

Despite interest from elsewhere, the 19-year-old and the 21-year-old’s desire is to play for Barcelona, even though they have not yet made a decision on their future.

De Jong views the Spanish champions as the right club for his development and De Ligt feels the same.

The Eredivisie stars remain hopeful of playing together once again at another club in the future. 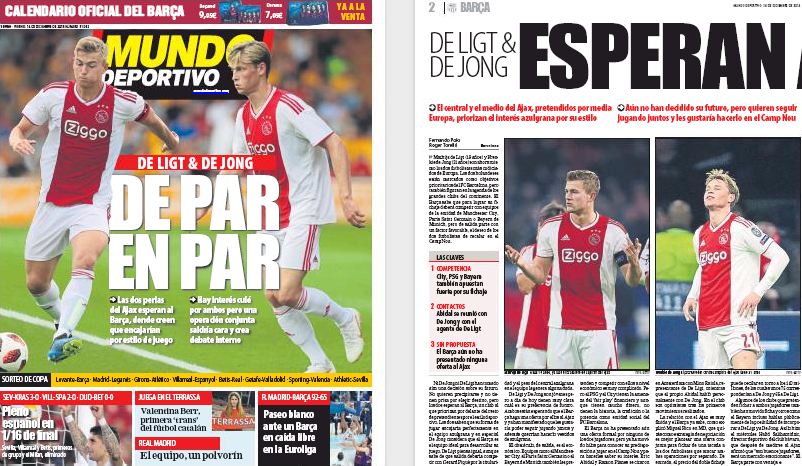 The newspaper report mentions the duo are ‘very clear’ that they want to play for Barca and are hoping that the club would make bids for them, but so far, Ernesto Valverde’s side have not tabled any official offers for the Dutch duo.

Mundo mentions Barca will face one ‘obstacle’ to complete transfers and that will be down to the financial aspect, where they will not be able to compete with the likes of PSG and Manchester City.

Ajax and the European giants share a good relationship and a joint bid of €140m for De Jong and De Ligt is the best way to go forward rather than negotiating for each player separately.