Pep Guardiola wanted to sign Leicester City star Riyad Mahrez for Manchester City earlier in the January transfer window, however, the deal didn’t take shape and the Algerian international continued with the Foxes until the end of the season.

The Premier League winners are set to complete the signing of the 27-year-old in the summer transfer window, if the reports from Mundo Deportivo and others are to be believed.

The Catalan newspaper claims Mahrez will undergo his medical at City this week. The Leicester star will be the “new Citizen player” and the English champions will pay €68 million to the Foxes to secure the player’s signature.

Mahrez has long been trying to leave the 2015/16 Premier League winners and even handed in a transfer request last summer. His wish to leave the King Power Stadium is set to be fulfilled in the ongoing transfer window, if everything goes according to plan. 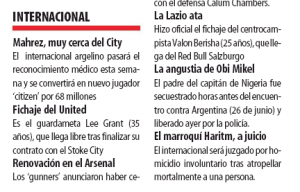 The Catalan media haven’t been pushing any Barcelona interest, and in Italy it’s accepted the player is much likelier to move to Manchester City than join a Serie A club, with AS Roma previously interested.

A couple of weeks ago the Algerian media also said a move would be agreed soon, and everything is falling into place.

Napoli midfielder Jorginho is another target for Guardiola and the Brazil-born Italian international could also seal his move to City in the “coming days”, according to Sky Italia.