It’s only been three months since Portuguese winger Daniel Candeias left Rangers, after just a couple of years at the club.

Despite being a regular in Steven Gerrard’s side, he was allowed to leave the Scottish Premiership club.

And since the 31-year-old also has a past at Porto, where he spent a long time in the club’s academy, he’s a good guest to speak to about the upcoming Europa League clash between the two clubs.

Candeias has been interviewed by Portuguese newspaper O Jogo, and basically acted like a spy who could tell them everything he knows about Gerrard’s Celtic.

“Rangers are a team with a lot of attitude, with quality players who play aggressive football, try to push high, like to have the ball and make a simple circulation. They are similar to FC Porto in terms of aggressiveness and the pursuit of possession,” Candeias told O Jogo.

“They have a Colombian striker, Alfredo Morelos, who scores many goals and has a lot of quality. There’s also quality in players like the other striker Defoe. There’s also the right back Tavernier, who goes up a lot up on his corridor, supports the attack well and crosses well.” 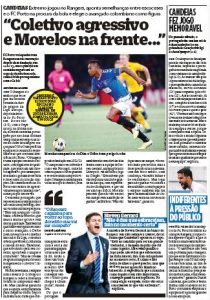 On manager Steven Gerrard, Candeias only had good things to say.

“He’s on his way to being a great coach, in the image of what he was as a player. He intervenes when the game asks, not like the ones who fight on the sideline, he talks to the players at the right time. He’s calm and doesn’t fail to say what is needed, but if he has to be aggressive, he’ll speak in the locker room. The experience he has accumulated as a player has been important, he can pass it on to the players. In European competition, everyone will be aware of what they will face.”

The player has also claimed that a packed Estádio do Dragão should not be enough to intimidate Rangers: “The atmosphere won’t be a problem for Rangers because they’re used to always playing with 50,000 fans on the weekend. So they won’t be influenced by the pressure of the stands, it’s indifferent to them.”

Candeias joined Rangers on a €800k deal from Benfica in the summer of 2017. In his two years in Glasgow, he made 14 goals and contributed 25 assists in 97 appearances.

He moved to Turkish side Genclerbirligi Ankara in a €250k deal last summer, and has been doing pretty well since his arrival there.