Home Europe Spurs getting more than thought – Tottenham exit can be announced ‘in...
SHARE

Kieran Trippier is in Madrid, all ready to start what will be an exciting new chapter in both his career and life.

Linked sporadically with Atletico Madrid throughout the summer, Diego Simeone’s side were concentrating more on signing other targets. Difficulty in doing so saw them go more seriously for the Trippier idea and it doesn’t seem to have been too hard to find an agreement.

Whilst initial reports put the transfer fee at €25m, with some going as low as €20m, Wednesday’s edition of Marca reports Atletico will be sending €30m to Tottenham for the fullback.

The transfer can be announced ‘in the coming hours’ and Trippier won’t be Atleti’s only new boy this week. They’re also signing Mario Hermoso from Espanyol.

Hermoso had been linked, albeit weakly, with a move to the Premier League, and the Madrid team will be paying €25m for him. 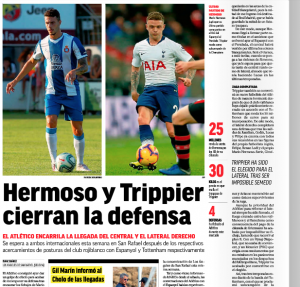 Mundo Deportivo report Trippier will be the first Englishman to play for Atletico in 95 years, the last one being ‘a forward named Drinkwater’ in the 23/24 season.

Apparently there are few records on Drinkwater, but he scored 10 goals in three games, so certainly made an impact.