You know you’ve entered silly season when articles are being written based on a bunch of “if scenarios”, which is exactly what’s happening regarding Mauro Icardi.

Right now, the Argentinian striker isn’t going anywhere, quite happy at Inter in Italy, set to make at least €5m next season from his current contract, even if he’d like a chunk more, with demands of around €8m.

That being said, at no point has Icardi expressed a desire to leave Inter in the near future, but that could all change if the likes of Chelsea and Tottenham come knocking.

Corriere dello Sport are the ones running the story on Thursday, explaining both Spurs and the Blues would consider the 25-year-old should either Harry Kane or Alvaro Morata leave Wembley and Stamford Bridge respectively. 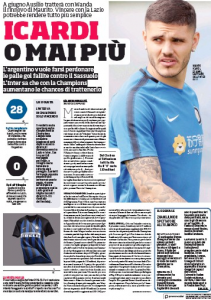 As you all know, the England international has been heavily linked with a move to Real Madrid, even though such a transfer appears extremely difficult, while the Spaniard is being sent back to Juventus by the Italian press.

Corriere state Mauricio Pochettino is a big fan of Icardi’s ability and has been keeping an eye on him.

With a €110m release clause in his current deal, that’s how much Inter would be asking for should anyone come knocking, and, at that price, only departures of said strikers would make this transfer even remotely realistic for either side.

We just thought we’d explain what’s actually being said before “SPURS/CHELSEA PREPARE SHOCK MOVE FOR SERIE A STAR” appears as a headline somewhere else.