Mesut Ozil to Chelsea, prepare for it to be a thing and fill a gap in the rumour market.

With the Catalan media now deciding they don’t want a Coutinho-alternative and would would much prefer the real thing, Mesut Ozil to Barcelona is drifting away.

Manchester United rumours have gone relatively quiet, but are surely due for a periodical peak, and Arsene Wenher has made it clear, if the decision is solely his, Ozil won’t be leaving Arsenal in the January transfer window.

SportBild have a feature this week looking at Arsenal and their potential changes ahead, and part of that inevitably comes around to Ozil. Explaining the German international is asking for €350k a week, something Arsenal and Barcelona are said to have baulked at, SportBild then bring Chelsea into it.

Chelsea are said to now be a ‘hot candidate’ to sign Ozil, with SportBild saying that’s according to their own information. It’s not made clear whether Chelsea would make a January attempt or wait until the summer, although the flow of the article seems to suggest the latter.

That would give Ozil the opportunity to stay in London. 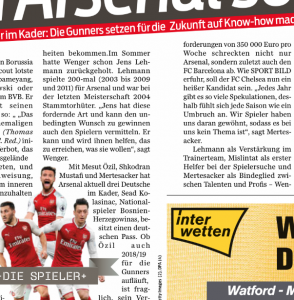 SportBild had Per Mertesacker with them for their look at Arsenal, and obviously asked him about it all.

“Every year there is so much speculation,” explained Mertesacker. “So every season feels like a change, we players have got used to it, so it’s not an issue for us.”

It may well be an issue for Arsenal fans if Mesut Ozil ends up at Chelsea.