As you well know, Manchester United wanted some kind of winger this summer, with Ivan Perisic clearly at the top of José Mourinho’s list.

The stand-off between the Red Devils and Inter was rather long and, in the end, uneventful, with the Portuguese manager having to settle with just the three arrivals, rather than four.

And, if Corriere dello Sport over the weekend are to be believed, the club missed out on another forward on his wishlist: Adam Ounas.

Manchester United’s interest in the former Bordeaux starlet is nothing new, with the Red Devils being after him for around a year, and it was José Mourinho who was pushing for his signature. 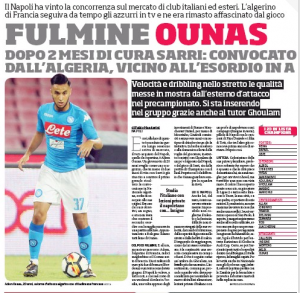 The Italian newspaper make that very clear, explaining that when Napoli started negotiating for the 20-year-old’s arrival, basically wrapping up the deal back in less than a week in February, two clubs were after him: Roma and the Premier League club.

In fact, Corriere go out of their way to emphasise that it was ‘by Mourinho’s hand’ that Manchester United were after him, and the Italian outlet’s decision to point that out suggests Ounas is someone the Special One really wanted.

Anything but your standard winger, the Napoli starlet is more of a Juan Mata type of player, or a Bernardo Silva, who Mourinho allegedly missed out on too, alternative, if you will.

Exciting the Stadio San Paolo faithful with his dribbling during pre-season, perhaps the Italian media, who love getting one up on those pesky rich English clubs, just fancied rubbing salt in old wounds with this report as he edges closer to first-team football.

We can’t tell for sure, but it certainly looks that way.