Home Championship Spanish report says Qatar has invested in Leeds United, rather than a...
SHARE

Thursday’s edition of Spanish newspaper Sport has a report on football in Qatar and how the country has been looking to extend their global football reach for some time.

As part of the article, Sport state: ‘In 2010 they bought PSG and, to a lesser extent, invested in Cultural Leonesa, Leeds and Eupen in addition to signing trade agreements first with Barcelona and then with Bayern Munich.’

In Spain the feeling that Leeds are under the Aspire umbrella isn’t new, rather than it just being a partnership related to training, sharing expertise and facilities.

There’s some reasonable evidence for that, given the Cultural Leonesa and Eupen connections. This isn’t just a relationship revolving around Aspire’s expertise and facilities, given there’s also players being shared.

Cultural were taken over by Aspire in 2015, with there being no secret about the nature of that relationship.

In April of last year the Spanish club announced: ‘Cultural and Sports Leonesa is thrilled that our proprietor, Aspire Academy, is extending it’s reach to English football, with our director and vice-president, Ivan Bravo, joining the Leeds United board.’ 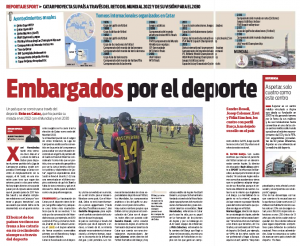 Again, this clearly isn’t just something which will see Leeds United pop over to Qatar for warm weather training. Clubs can travel to Aspire and take part in tournaments without any official relationship with the organisation, so Leeds have something more.

The Spanish newspaper may have made a mistake, it’s possible, but Leeds United’s partnership with Aspire, and through it Cultural, was reported in Spain long before it was widely pushed here.