As Mauro Icardi’s saga goes on, Spanish newspaper Marca today brings a few claims on the possibilities the Inter Milan striker has for his future.

The outlet claims that ‘since the problems started’, four clubs have been showing their interest in getting the player: Real Madrid, PSG, Juventus and Manchester United.

Now the interesting thing is although a competition like this would increase the price of any player, Icardi’s situation is different, as he should leave for much less than expected.

All this mess with the Italian club started with Inter trying to grow his release clause from €110m to €200m, but now, with an ‘unsustainable situation’, Icardi could leave for only €40m or €50m. 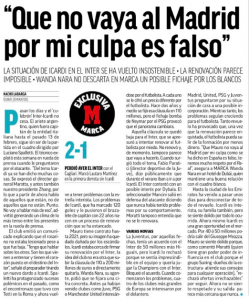 Marca managed to speak to his agent Wanda Nara, who didn’t rule Real Madrid out of the race: “That Mauro doesn’t go to Real Madrid as it’s been said in Spain is false, we have much respect for Real.”

The outlet doesn’t seem to know who would be the favourites in this race. All they say is PSG, Manchester United and Juventus have been interested for a long time, but it doesn’t sound like any of these clubs would have advanced negotiations with Inter Milan for now.

Given they were speaking to Wanda, there’s obviously the possibility she was the source for the clubs named.