Jordan Pickford has saved only one penalty in 69 Premier League appearances so far.

However, the 24-year-old became a hero for his country after his save in the penalty shootout helped England overcome Colombia in the knockout stages of the 2018 World Cup.

It was Pickford who stopped Carlos Bacca’s penalty after which Eric Dier converted his kick to help the Three Lions seal a berth in the quarter-final.

Pickford has been praised for his heroics around the world media and now Spanish newspaper Marca has joined the party in celebrating the Everton goalkeeper’s display.

It’s not just the penalty save, but Pickford pulled off save of the tournament when his efforts stopped Mateus Uribe’s strike from 30 yards.

The Spanish newspaper highlights how ‘the cat’ Pickford has managed to be the first choice goalkeeper for England, ahead of Jack Butland, Nick Pope and Joe Hart. They also 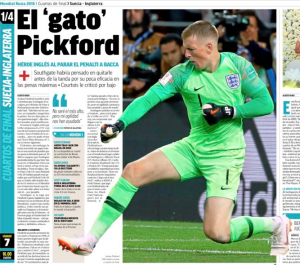 talk about his development, despite playing in the lower divisions of English football in the past.

Marca have managed to get a few words from Pickford’s former Sunderland teammate Jordi Gomez: “I would highlight his personality and security he had despite his youth. He has a very long and precise goal-kick. It almost reaches the opponent’s area.”