On February 4th, there was public drama between Eric Abidal and Lionel Messi over comments made by the Barcelona technical secretary that many players didn’t work hard and weren’t satisfied under Ernesto Valverde.

A day later, Sport reported the Ballon d’Or winner could leave the Camp Nou at the end of this season. His contract with the La Liga winners expires in 2021, but the Argentina can leave the club as a free agent in the summer.

Marca now state the entire episode could see Messi ‘slam the door’ on his Barcelona career.

It’s claimed the South American is ‘fed up’ with certain situations that make him look like he was the one behind decisions taken at the club, while in reality he had no role whatsoever.

This includes the hiring and firing of coaches and the club’s decision to bring in players.

The Spanish newspaper adds ‘Messi has the power to be who he is’, but they follow it up by stating he doesn’t dictate Barca’s sporting policy.

Earlier this season, Messi made it clear he wants to finish his career at Barcelona, but to do that, he needs a winning project.

Marca report there’s no winning project as of now and even the new signings haven’t contributed enough so far. 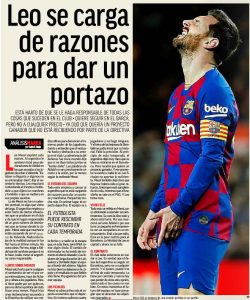 All these reasons begin to tire the Barca star and he considering leaving the club.

Marca state: ‘His face says it all and now he’s fed up. That’s why he reacted like that to Abidal or that’s why he had a small confrontation with a teammate in training.’

Even though his desire is to continue at Barcelona, Messi won’t do that at ‘any price’.

Barcelona will be hoping to put an end to these reports as soon as possible.