Catalan newspaper Sport now have a correspondent based in Manchester. Pol Ballus will be tasked with reporting on Pep Guardiola and Jose Mourinho and their respective clubs.

With Sport being a Catalan newspaper and having a longstanding loathing of Mourinho, the coverage will almost certainly be heavily Manchester City leaning, and their newspaper on Monday underlines that.

Manchester City have been cosying up to the Spanish press for a while, including inviting newspapers over for exclusive access to the club. In February 2015, the encouragement of the Spanish media got to the point that it annoyed Manuel Pellegrini.

The English club had invited Sport journalists for a tour of their facilities, an invitational trip expected to last several days. The subsequent coverage in Spain was almost laughable in it’s advertorial nature. 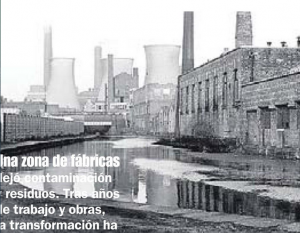 Praising Manchester City’s new training facilities and headquarters, Sport used before and after photographs, with the before ones showing Manchester in some kind of post industrial revolution hell. The newspaper had given the club credit for far more than a football club could ever be responsible for.

Pellegrini thought the freedom given to Sport was getting a bit too much and ahead of a crucial Premier League match against Newcastle United he cancelled access to journalists from Sport, Mundo Deportivo and other Spanish media outlets.

There had been interviews set up with Manchester City’s Spanish speaking players, to talk about the upcoming Champions League game, but Pellegrini thought it wrong to do so when the next match was Newcastle. The manager wanted the focus on the Premier League fixture, rather than building hype in Spain for the Barcelona game. 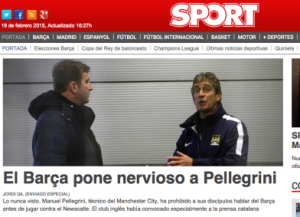 Hitting back at Pellegrini, the Catalan media slammed his ‘bizarre decision’ and reported a stand-up argument with Ferran Soriano, something they used pictures to back-up.

It hasn’t harmed the relationship and Sport and Mundo Deportivo have continued to travel to Manchester and enjoy privileged access.

Manchester City don’t do this just because they fancy more Catalans around the place, it’s all PR… and it works. The first 5 pages of Catalan newspaper Sport on Monday are all about Pep Guardiola’s unveiling.

Some Manchester City fans think the event was a little over the top, and whilst that may be so, the level of the coverage in Barcelona would beat it hands down.

The first five pages, including the front cover, and also a piece on the back page… quite some effort.

Mundo Deportivo also have the event on their front page but then, strangely for a story they think deserves the cover, don’t mention it again until page 19.

The angle for this partic 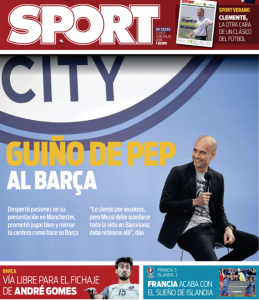 Again, it’s Sport who are the most gushing, but none of this is for Manchester City to stress about, the plan to get close to the Catalan media has obviously worked. Throw Pep Guardiola into the equation and, for now at least, there’s growing interest in the club in Spain.

Things like adding a Catalan language Twitter account, as the club have just done, obviously help, and targeting of Catalonia, assumably to pick up some ‘second club’ fans, is a clear and long term aim.

It’s not just limited to Guardiola’s home region, Marca have a double page spread but AS only manage a small feature toward the back of their newspaper.