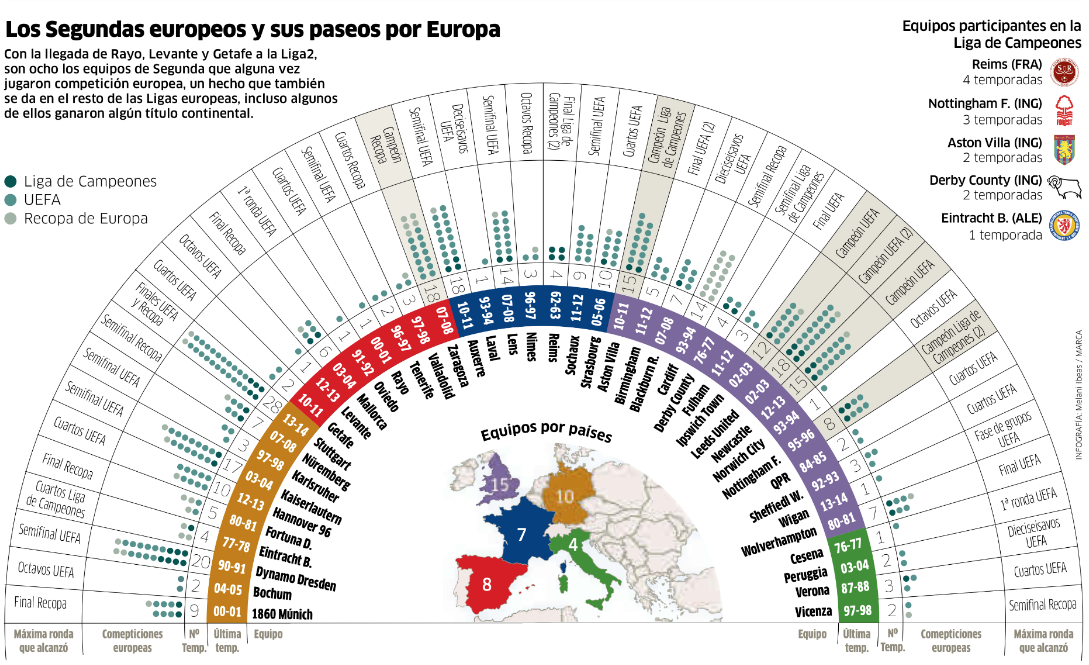 Spanish newspaper Marca has today highlighted the number of major clubs from Europe who are currently playing in the second tier of their domestic competitions. With the relegation of Aston Villa and Newcastle United last season they join the likes of Leeds United and Nottingham Forest in the Championship.

Marca have today reported on the decline of clubs in Spain, who in the past years were playing in La Liga, but have since been relegated.

Clubs with European experience like Tenerife, Mallorca, Oviedo, Valladolid, Zaragoza, Levante, Getafe and Rayo Vallecano all find themselves in La Segunda, but Marca have pointed out this is happening all across Europe, and especially in in England.

15 of the 24 teams currently in the Championship have played in European competition, with Aston Villa and Nottingham Forest being the standout examples, after winning the European Cup in the 1970s and 80s.

Clubs like Leeds United and Newcastle United have also had success in Europe in the Europa League (or the competition in a previous incarnation), whilst the latter got to the semi-finals of the Champions League during their time in the Premier League.

Marca feels these are English elite clubs, who have now been replaced by the likes of Bournemouth and Watford in the Premier League due the backing of their owners, whilst a club like Leeds United has suffered with financial issues in recent years.

This trend has also happened all over Europe with 1860 Munich, Kaiserslautern and Stuttgart all now in Bundesliga 2, whilst Stade Reims have dropped out of Ligue 1 in France.

These clubs still carry a great support, and it’s nice to see them getting some recognition in Europe. In our experience the clubs mentioned still generate a huge amount of interest from English football fans, more so than several clubs in the Premier League.