West Bromwich Albion were one of three Premier League clubs who were relegated to the Championship, and subsequently the Baggies could see a few of their players leave.

Nacer Chadli is very much on the possible exit list.

The Belgium international did not feature regularly for West Brom last season, making five appearances in the Premier League.

Injuries have restricted his playing time for the English club in the recently concluded season.

However, that hasn’t stopped him from attracting interest. According to Belgian newspaper HLN, the attacker is attracting interest from Spain. Now that West Brom are relegated (Ed – Stop pushing it home, these people are suffering), clubs will look to take advantage of the situation by making an approach. 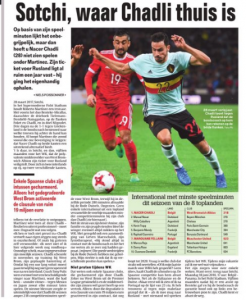 Tottenham Hotspur man, but some have been ‘charmed’. Chadli is said to have a clause in his contract which can see him leave for €19m.

Asked if he has already played his last match for West Brom, Chadli said: “No idea. I will see if I’m in the squad for the World Cup. I have already told my agent that – if I can go to Russia – I do not want to speak to anyone during the World Cup.”