The Premier League club said Radulovic would be arriving for an undisclosed amount, subject to international clearance.

Brighton’s U23 coach Simon Rusk was quoted as saying: “We had been made aware of Bojan as a result of his rapid rise to the first team at Lleida, who play in the third tier of Spanish football, and he has been a regular in their senior team for much of the current season.

“We have been impressed with what we have seen of him in action, and are delighted to welcome him to the club. His challenge now is the same of all those players in the under-23 age group, and that is to continue his development with the aim of breaking through into the senior squad.”

Friday’s edition of Catalan newspaper Sport covers the deal, but reports Lleida are still in negotiations with Brighton to allow the striker to return on loan for the rest of the season, meaning he’d only move to England fully from June 30th onwards. 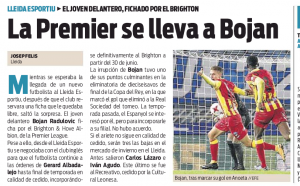 That’s backed up by the Catalan club’s official website, who claim the same thing.

Signing players on loan at Lleida mustn’t have the same deadline day restrictions, otherwise all of this would be pointless.

Lleida clearly want Radulovic back for the rest of the season and there’s going to be some disappointment if that isn’t possible.

From a Brighton perspective it may be best to leave the 18 year old where he is, given the progress he’s made in recent months.