Home Championship From Spain: Victor Orta could be on verge of leaving Leeds United...
SHARE

Presented as a transfer guru who could return to the Premier League, there’s been question marks placed over a lot of the business which Orta has overseen.

Middlesbrough supporters will glorify in telling their Leeds rivals they told them so, feeling Orta didn’t do the best job when he was at the Riverside.

There’s a possibility things could be about to change, and Orta leave English football altogether.

Mundo Deportivo report Orta is a candidate to fulfil a similar role at Deportivo La Coruna, and is one of the names currently being considered after Richard Barral left the job.

No other candidates are mentioned in the claims. 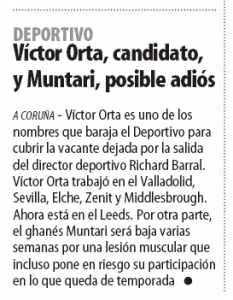 Deportivo are currently 18th in La Liga and looking likely to be relegated to the second tier, and that’s what Orta would have to consider.

It’s likely his budget at Leeds United would be bigger for the next summer window than it would be at Deportivo.

Clarence Seedorf is the current Deportivo manager, having taken over in February for the remainder of the season.