Real Madrid some time ago agreed a deal with Brazilian club Flamengo for Vinícius Júnior that would see the player join the Spanish capital club in July 2018. As a part of the deal, the forward will stay at Flamengo until July 2019, but there is an option that he could stay with the La Liga outfit, if both clubs agree to it.

Vinícius can join the Spanish capital club after he turns 18, which will be on July 12th. According to AS, Real players will regroup five days after his birthday for the pre-season training.

The European champions are happy with Vinícius’ development in South America and he will be Real Madrid’s first addition of the summer. His last match against Flamengo will be against Palmeiras on June 14th.

After that, Vinícius will go on a holiday and then join Madrid on July 17th. The club’s head of international football Juni Calafat is in contact with the player’s family.

AS claims the final call will be taken by the new Real manager whether to keep him at the club or allow him to continue with the Brazilian club until next year, but he will spend time training there this summer. 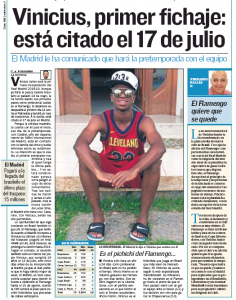 Zinedine Zidane has stepped down from his position and the Champions League winners are yet to appoint his successor. The other problem for Real Madrid is that they can register only three non EU players. As of now, they already have three players – Keylor Navas, Marcelo and Casemiro.

Madrid have time until August 15th to take a decision on Vinícius as that is the Brazilian Football Confederation’s (CBF) last day to register players that come from clubs outside the country.