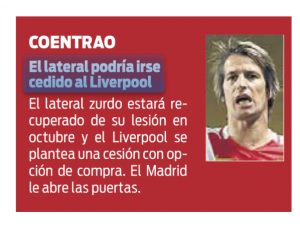 We’re not sure what Catalan newspaper Sport are up to, but on Monday they have a snippet in their transfer section linking Liverpool, quite seriously, with a move for Fabio Coentrao.

Despite it seeming like he’s been around for decades, Coentrao is still only 28 years of age. He’s a very good player, extremely experienced, and versatile too.

Primarily a left back, Coentrao can play further up the pitch and can even help out as a defensive midfielder if needed. On the face of it, it sounds like a deal seriously worth considering.

Sport say Real Madrid would open the door on an exit, and that Coentrao could be on his way to Liverpool, on loan with a purchase option for the Premier League club.

It all sounds like good stuff, especially with Alberto Moreno’s mistakes against Arsenal.

However, Coentrao is injured and not expected to be available until October. The Portuguese international suffered a serious hamstring injury in April, whilst on loan at AS Monaco, which ruled him out of Euro 2016, and he’s still not back.

Maybe Sport are winding up Real Madrid. But if Liverpool are still looking at the end of the window, and Coentrao is a little closer to fitness, then it may not be the craziest idea in the world.