Home Europe From Spain: Rangers have ‘returned from the dungeons’ and Steven Gerrard is...
SHARE

Ahead of Rangers match against Villarreal, the Spanish press was talking more about possible events off the pitch than on it.

A huge police operation was launched, with fans of the Scottish Premiership club paying for the actions of a minority. Classified a high risk game, Rangers were the subject of plenty of negative publicity.

After the match, things are very different. Villarreal’s local media report everything went fine off the pitch, although they credit that on the policing tactics. On it, Rangers surprised many.

Coming back from being a goal down twice, thanks to Kyle Lafferty and Scott Arfield, there was a real fighting spirit, and Spanish newspaper AS explains this is due to the ‘genius’ Steven Gerrard has managed to transfer from his playing days to being a manager at Rangers.

The club have ‘returned from the dungeons’ of their troubled period, and drawing away to 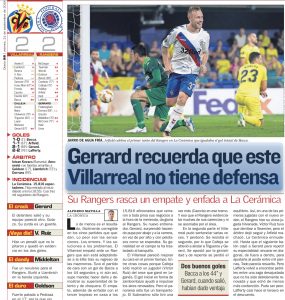 Villarreal, who were easily the favourites, was the cherry on top.

Another Spanish newspaper, Marca, explains Rangers were considered such a lesser opponent that Villarreal rested players.

It’s unlikely they’ll do the same at Ibrox.

Rangers star’s ‘desire to emerge’ led to agent offering him around...