Swansea City can feel a little bruised and naive over the Roque Mesa situation.

Mesa had been strongly linked with Sevilla before moving to Swansea City. However, the Spanish club wouldn’t pay what Las Palmas’ wanted for the midfielder despite Mesa wanting to join them.

Swansea City then came along, paid Las Palmas around €12.5m and gave Mesa bigger wages than he’d have got in Spain. Just a few months later, Mesa was already leaving for Sevilla on loan, suggesting the talks had never really stopped.

Sevilla got themselves a buying option of €7m, showing a €5.5m loss for Swansea City, with it looking like the Welsh club had been used to get Mesa from Las Palmas to Sevilla at a much cheaper price. 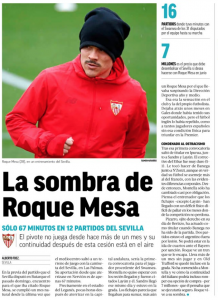 Mesa hasn’t arrived in peak physical condition, and has only played a total of 67 minutes since his move.

‘Roque sees a train that escapes him’ say Marca, and point out he hasn’t actually played football for over a month. It’s explained there’s a chance Sevilla will even turn their nose up at the €7m clause, something Mesa is described as feeling was almost automatic.

It’s a mess, but unfortunately for Swansea City it’s also their mess and there’s a reasonable chance Mesa could be back in Wales at the end of the season.

A lesson for the future.