The front page of Saturday’s edition of Sport has another splash about Barcelona interest in Chelsea’s Willian, but inside there’s also Manchester United claims.

In a sub-headline it’s stated ‘United offers €60m’, and the Catalan slant is that Jose Mourinho’s club will prove strong competition to Barcelona.

Willian’s ‘absolute priority’ is to leave Chelsea this summer, according to Sport, and whilst Barcelona are said to be his first choice, other options are also being explored by people close to the player.

Among those other options is ‘mainly’ Manchester United, with Mourinho pushing for the player. Whilst Sport say in their sub-headline that the club have already offered €60m, in this section they state Mourinho’s men are ‘willing to offer some €60m for him’.

Sport believes there’s a €60m United offer knocking around but slightly contradict themselves about which stage it’s at. 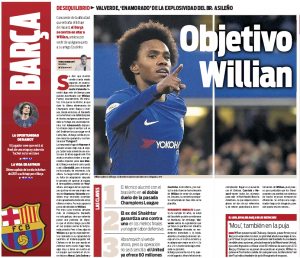 Manchester United have been linked with the Brazilian for some time and waiting for Willian and Barca to fail may be one of the reasons the transfer window at Old Trafford has been relatively quiet so far.

Despite Sky Sports reporting on Friday evening that Barcelona have now offered €60m themselves, there’s no claim of that in the Sport newspaper article.