Lucas Hernandez to Bayern Munich is being taken as pretty much certain by both the Spanish and German sport media.

It’s expected the Bundesliga champions will pay the player’s €80m buyout clause when the winter market opens, and he’ll make the move to Germany.

Marca still want to spice things up a little and for two days have now been explaining how Manchester United came close but ultimately lost out.

The Premier League club are said to have made an approach towards the end of the summer window, and were ready to pay the €80m needed. However, at the time Hernandez wasn’t keen on such a move and United were told to wait until January.

As long as there hadn’t been a renewal beforehand, Hernandez ‘agreed to speak’ to the English club 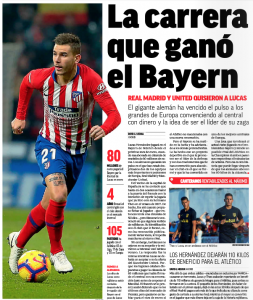 Unfortunately for any Manchester United interest, Bayern have now beaten the competition and convinced the World Cup winner on the sporting project.

The idea is Hernandez will be the leader of the German club’s defence in the future, playing centrally.