Riyad Mahrez to Barcelona is big news in Spain on Thursday, with Catalan newspaper Sport claiming the Blaugrana are interested, and contact has been going on for some time.

Sport carry the claims on their front page and then continue with a more detailed story in a further double page spread. Barcelona won’t have it all their own way over Mahrez, with the Spanish newspaper claiming both Liverpool and Juventus have already made approaches to the player.

Liverpool interest has been reported repeatedly in the English media, but Sport don’t say that’s where their information is from, and present this as their own story. Unsurprisngly, the Catalan newspaper believe Mahrez would much prefer a Barcelona transfer than a move to Liverpool or Juve, and that could cause issues for Leicester City. 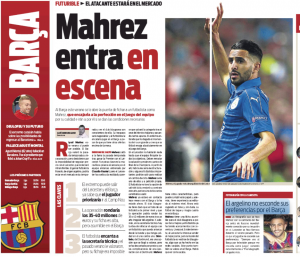 It’s stated that Leicester would like to sell to the highest bigger, which goes without saying, but Mahrez’s preference could stop that. Jurgen Klopp would have to be at his most persuasive if Barcelona and Liverpool interest is correct.

A potential transfer fee would be around €35m to €40m, say Sport, which is no problem for Liverpool, although those figures could be more weighted to what Barcelona would want to pay.

Club have Manchester United man ‘in their sights’ – Are ‘ahead...