Mateo Kovacic was clear he wanted to leave Real Madrid in the summer and the midfielder was loaned out to Chelsea for a season.

As a part of the deal, the Blues do not have an option to sign the Croatian international on a permanent transfer in 2019.

Today’s edition of AS claims the 24-year-old’s chances of returning to his parent club look slim as the 13-time European champions are ‘disgusted’ with the attitude he showed in the summer.

For this reason, the west London club are planning on keeping him at Stamford Bridge beyond this campaign and the Spanish newspaper claims Maurizio Sarri’s side have a ‘clear advantage’ in completing the transfer.

Another advantage for Chelsea is that the former Inter Milan man also ‘likes the idea’ of joining his current side on a permanent deal.

In the last two seasons, the English side signed Alvaro Morata from the La Liga giants, while Thibaut Courtois signed for Real Madrid earlier in the summer. 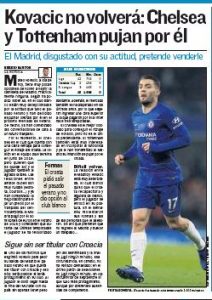 The two clubs have already started the negotiation to fix the price for Kovacic.

Real paid €35m to the Nerazzurri in 2015 and are looking for a higher fee than that to part ways with the midfielder.