Brahim Diaz’s contract at Manchester City will expire at the  end of this season and several reports in Spain have indicated that Real Madrid are interested in signing him, with some claiming it’s pretty much done.

Marca are confident the 19-year-old will join the Champions League winners, but are not sure whether it will be in January or next summer.

Another Spanish newspaper AS now claims Los Blancos have already convinced the attacking midfielder to not renew with the Premier League winners so that he can join them on a free transfer.

It’s also reported that Paris Saint-Germain have joined the race and the Ligue 1 outfit are trying to ‘seduce’ the player, but, the teenager has set his sights on joining the 13-time European champions.

Diaz is managed by Pep Guardiola’s brother, Pere, and AS mentions the agent has informed his client to be patient and has asked for more time to study all offers, including one from City to extend his contract.

There is an option for the Malaga-born player to join Real Madrid in January, but that is only possible if they allow one of their players to move to the Etihad. 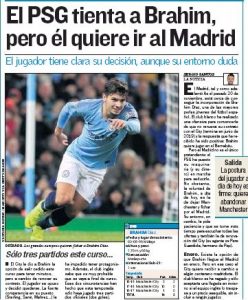 However, the La Liga giants are not ready to include any player and will only take Diaz, if he is available for an affordable price.