The Spanish media are building up ahead of Chelsea’s match against Real Madrid on Wednesday evening, with the tie at 1-1 after the first leg.

Eden Hazard, who swapped Stamford Bridge for Los Blancos, is splashed across the front page of Monday’s AS. The reasoning is that the Belgian could be given a surprise start against his former club this week.

Such a move would be considered a surprise because of Hazard’s recent struggles. He’s only appeared in 16% of Madrid’s La Liga minutes so far this season, and has only played 24 minutes of Champions League football, which came against Chelsea, since November.

At the weekend he started against Osasuna and played for 74 minutes, putting in a good display. 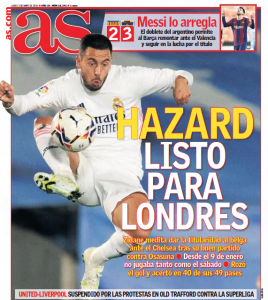 AS report that means Zinedine Zidane is now considering starting him against Chelsea, hoping the big occasion can bring the best from their big signing.

A match-winning display against the Blues would put a lot of the Spanish media criticism to bed, at least for a while, and give Hazard the chance to kickstart his Real Madrid career.