For all intents and purposes, Andre Gomes to Everton is a completely done deal this summer, according to multiple claims from Spain and England.

The Portuguese midfielder, who enjoyed a successful loan spell at Goodison Park this season, is all set to make his move a permanent one.

Everton and Barcelona have agreed on a fee and the player, according to pretty much every source, is extremely keen on the switch. So what’s the hold-up? Well nobody seems to know.

Last week we brought you news, via Mundo Deportivo, that it was a ‘bureaucratic procedure’ holding the whole thing up. We found the term a little confusing given it usually refers to international clearance or a work permit, but Gomes needs neither of those.

They followed that up yesterday with news it was done and ready to be completed. Marca have backed up those claims today and explained why Barcelona are desperate to sell.

The newspaper says Barca need to raise at least €70m in sales before June 30th, which is the end of their financial year. That will stop them from posting a loss this year.

The idea is to get rid of players who are already amortised or almost amortised, to maximise the benefits. Gomes is one such player, and only the announcement of the agreement is missing. 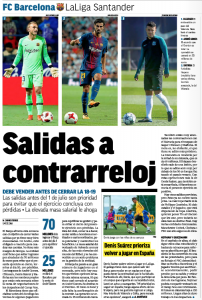 And the lack of any announcement remains baffling. Gomes is an excellent capture for Everton, and it’s strange they don’t seem more keen to get it over the line. They’re getting a good deal, and it’s not like they don’t have other fish to fry in this window either.

The deal is obviously done, so unless they’re waiting to complete medical before announcing it, with many signings announced pending a medical, there’s no reason for them to keep delaying. Barcelona would certainly appreciate it if they’d hurry up, that’s for sure.