According to a claim in the Spanish media Everton are interested in signing PSV forward Hirving Lozano.

The 22 year old is representing Mexico in this summer’s World Cup which could give the youngster a chance to showcase himself.

Mundo Deportivo report Everton, along with La Liga side Valencia are ‘most attentive’ to signing Lozano. The Mexican impressed for Dutch champions PSV last season, and this has brought him to the attention of the two clubs.

It only seemed a matter of time before Everton’s new sporting director Marcel Brands was linked with raiding his former club and Lozano may be an option for the Toffees in this transfer window.

Brands won’t want to upset PSV, but if it comes to the situation that Lozano could be leaving anyway, then Everton always have that advantage.

With Wayne Rooney leaving Everton, Marco Silva will be looking to bolster his attacking options this summer. 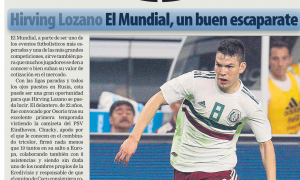 Lozano joined PSV last summer and scored 17 league goals in his first season with the club. The player is contracted to PSV until 2023.