Arsenal summer signing Dani Ceballos was the star player in the Gunners’ 2-1 victory over Burnley at the Emirates.

Pierre-Emerick Aubameyang and Alexandre Lacazette got their names on the scoresheet and both the goals were assisted by the Spaniard.

The Europa League runners-up signed the 23-year-old on a season-long loan deal from Real Madrid, after the midfielder was made aware he will not be included in Zinedine Zidane’s plans for this season.

In today’s edition of AS, they take a look at how players who left Real Madrid have fared in the first few fixtures of the new season.

Regarding Los Blancos owned player, the Spanish newspaper stated ‘Ceballos was MVP’ at the Emirates. 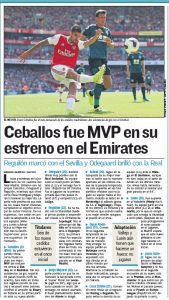 AS further explain that things couldn’t have been better for him in his full debut with the north London club.

To acquire the Euro U21 winner’s services on a temporary deal, Arsenal had to overcome competition from Tottenham Hotspur.

The report claims Ceballos’ performance against Burnley has ‘justified’ Unai Emery’s ‘determination’ to sign his compatriot.