Olivier Giroud’s contract at Chelsea expires after this season and he hasn’t featured for the Blues since the end of November.

The France international was linked with several clubs in the winter market, but he gave priority to Inter Milan. However, a move to San Siro has stalled.

Today’s edition of Mundo Deportivo claims the 33-year-old has emerged as a transfer target for Barcelona.

With Luis Suárez out of action until April, the La Liga winners are in the market looking for a new striker.

Barca’s main target is Pierre-Emerick Aubameyang, but Arsenal would not make it easy to sanction the Gabonese forward’s sale. 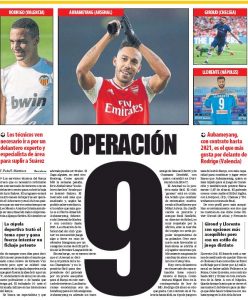 Therefore, the Catalan club are looking at other options and Giroud, along with Napoli’s Fernando Llorente, is viewed as an alternative.

Even though Giroud and Llorente have a different style of play, the two are viewed as ‘more affordable options’ by the Spanish champions.

Whether Barcelona will make an offer for Giroud in the coming days remains to be seen.