Antonio Adan, simply known as Adan, is a goalkeeper who plays for Spanish club Real Betis. The 31-year-old’s contract with his current employers runs down at the end of the next season.

According to Spanish newspaper AS, Adan is set to leave Benito Villamarin in the summer transfer window. The Betis custodian is a transfer target for Sporting and Getafe.

The Spanish club need a new goalkeeper having lost the highly rated Vicente Guaita to Crystal Palace. Wanting to leave in the January window, the goalkeeper was prevented from doing so and then signed a pre-contract agreement with Palace.

A complicated situation followed with insinuations in Spain and Italy that Guiata could get out of his Crystal Palace agreement and stay at Getafe, move to another Spanish club, or sign for a Serie A side.

Getafe are ready to pay €1.5m to secure Adan as their replacement, whilst Betis are trying to get as much from Adan’s sale as possible, as they have their own plans. They have already secured the services of Pau Lopez on a free transfer, but have been repeatedly linked with Adrián San Miguel.

AS report suggests West Ham United’s Adrián has been identified as a potential replacement for Adan. The Hammers’ stopper also has one year left on his contract and continually places doubts on his own future.

Manuel Pellegrini has already completed the signing of Lukasz Fabiański, with the Polish international arriving from Swansea City in what looks to be a shrewd signing. 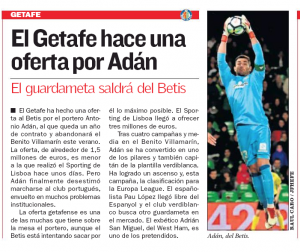 That will see Adrian drop down the pecking order at West Ham and, as he’s made clear repeatedly, it’ll likely mean he’ll search for a transfer.

Whilst AS link Adrián with Betis, it surely can’t be long until Getafe are brought in themselves.