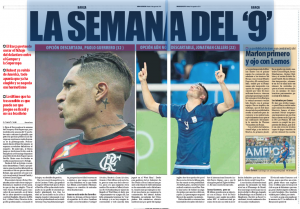 Barcelona’s search for a striker is getting pretty desperate, at least if the Catalan press are to be believed.

Mundo Deportivo have now linked more than 30 footballers to the club, to take over a position vacated last year by Pedro.

Barcelona tried and failed to sign Nolito in January, and then watched him join Manchester City this summer, without putting up a fight.

The situation has got so strange that Mundo Deportivo now reckon Paolo Guerrero could be a serious option. The 32 year old Peruvian has a much reported fear of flying and is currently playing for Flamengo.

And Barcelona haven’t given up on Jonathan Calleri. They go over his quotes about being set to sign for West Ham: “I need only to complete the visa and if there is no problem, and if everything goes well, I’ll play in the West Ham team.”

But then Mundo Deportivo point out that was more than a week ago, and since then West Ham have announced other signings. They call the situation ‘mysterious’, with the suggestion obviously being that Barcelona could swoop in and snatch the Argentine.

Calleri is currently at the Olympics, which isn’t a barrier to announcing a move.

There have been failed moves previously for the 22 year old.

It was thought he was entitled to an Italian passport, through family history, and that would have meant no need for a work permit, but trips to Italy and over a year of reports on it… still lead to Calleri saying he needs a visa.