Catalan newspaper Sport has a look at the Mario Balotelli situation in their Friday edition, and how things could have been so different for the Liverpool outcast.

Back when Balotelli was still with Lumezzane in Italy, Sport explains that Manchester United, Barcelona and Fiorentina had all been interested in the player.

So too were Inter Milan, and that’s where the Italian ended up. Now, Sport says nobody wants to buy or loan Balotelli, with there being an absolute void of interest from top clubs.

Wolverhampton are linked as a possible destination, but there doesn’t appear to be much concrete in that right now. Two years ago it was reported that Balotelli’s biological father had moved to Wolverhampton, and since there’s been that very weak link.

At the age of three, Balotelli went into foster care with a family whose name he eventually took. He was never adopted, just permanently fostered, and despite being born in Italy, he had to apply for citizenship when he turned 18.

After a successful and sometimes controversial start to professional football with Inter, Balotelli moved to Manchester City to be reunited with Roberto Mancini, and he was more successful than he’s often given credit for.

At the end of his first season with Manchester City, Balotelli was Man of the Match as the club won the FA Cup. The following year, Manchester City won the Premier League and Balotelli contributed 13 goals in 23 appearances, 9 of those as a substitute.

His performance against Manchester United at Old Trafford, as City won 6-1, is well remembered for his ‘Why Always Me?’ t-shirt moment, and his goals were crucial as the club won the title on goal difference.

At the time of that match, Balotelli was just 23 years of age and had the world at his feet. There were off the pitch dramas, but nothing nasty or overly serious. There were also an awful lot of made up stories about the player, reported repeatedly as fact.

In December 2011, a story broke that Balotelli had paid for 24 homeless people to stay at the Manchester Hilton on New Years Eve. It wasn’t true, we’d tweeted it as a joke, and immediately made that clear, but it had taken off.

The claims were reported everywhere and whether it was true or not didn’t matter any longer. A while later, journalism royalty Henry Winter published a story on Balotelli containing the claims, so we told him it wasn’t true.

Winter then told us that the Manchester City press office had confirmed it had happened. That’s how silly the whole thing got.

Euro 2012 saw Balotelli excel and he was one of the tournament’s very best players, and joint top goalscorer. Despite tears as Italy lost to a brilliant Spanish side, things were looking good.

But Balotelli and Mancini was always likely to blow up at some point, and it did, with the striker going back to Italy with AC Milan. Moving back in January, Balotelli scored 12 goals in 13 games, the next season was surely his.

It went reasonably well, Balotelli scored 18 goals for Milan, despite having some injury issues, and he was scoring for Italy regularly as well.

Then it all went wrong, Balotelli returned to England with Liverpool and was ‘welcomed’ back as something of a clown who did more off the pitch than on it.

He’d just turned 24 years of age and had proven enough actually on the pitch to be considered a decent player. Of course there were moments of frustration, but Liverpool hadn’t signed a chump.

Unfortunately Brendan Rodgers didn’t seem keen and it appeared a great deal of effort was put into making the transfer look absurd, both by Rodgers and a strangely eager local media.

It was a disaster for all involved, and with Rodgers determined for the move to look like a disaster of club planning, and use it as almost a distraction from his own faults, Balotelli didn’t stand a chance of repeating his previous achievements.

He didn’t seem to care much about that either, helping to dig the hole he found himself in.

Returning to Milan, Balotelli’s season there started off well. He genuinely put in a couple of pretty amazing cameos, he was back and Milan would benefit. Then a groin injury came in September and it didn’t seem to be handled very well.

By mid November, with the player struggling to get back fit, Balotelli saw a Danish specialist who decided he needed hernia surgery. When he returned, Balotelli was unable to immediately get back to his previous form.

It was a huge shame. But, the way things are being reported right now, it would be easy to feel Balotelli had done absolutely nothing in his career and was dangerously close to it ending. 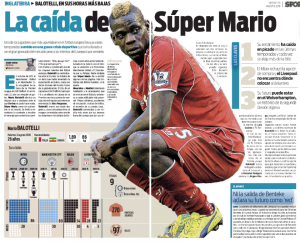 Sport say the trajectory of Balotelli’s career is going one way, and it’s unstoppable. The last few years have been an absolute disaster, according to Sport and others.

The Spanish article is just one of many around Europe painting a picture to say Balotelli is more or less finished.

It could have been so different had a 15 year old Balotelli sealed a Barcelona or Manchester United move, and enjoyed calmer and stronger guidance. Sir Alex Ferguson admitted in his most recent book that there was interest, but reckons he was warned off. Barcelona even went to the stage of watching him up close, but nothing came of it in the end.

A player with genuine talent and a trophy cabinet which many would love has, through his own choices, chance, and bad will from others, turned into persona non grata. Everywhere.

Far less talented players, who have achieved far less with their ability, have been given greater chances.

And yet Mario can’t find a club.