Home Europe From Spain: Barcelona likely to announce signing today, and another midfielder will...
SHARE

Barcelona have long been after Sevilla defender Clement Lenglet and the deal for the centre-back is yet to be completed.

Marca claims the Spanish champions have confirmed to the Spanish newspaper that they will pay the player’s €35m release clause ‘imminently’.

Barcelona will deposit the money at the La Liga headquarters and due to ‘bureaucratic reasons,’ the deal could not be sealed on Wednesday.

Ernesto Valverde’s side and Sevilla’s relationship in recent times has been damaged for several reasons. The two clubs face each other in the Spanish Super Cup and the venue for the tie was something the two clubs were initially having difficulties to agree.

The Catalan club wanted to include Lenglet’s transfer fee in the 2018/19 season and therefore they decided to wait until the start of this month to push for a transfer. Barcelona wanted to convince the Andalusian club to agree for the Frenchman’s fee to be paid in instalments, which was rejected by them.

Barcelona are likely to announce Lenglet’s signing today and his official presentation will be done on Friday. The 23-year-old will be the second signing of the summer transfer 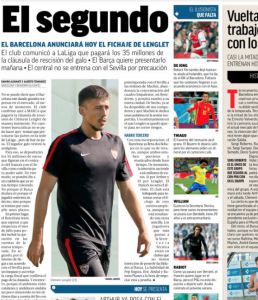 Marca also mentions the club are pushing to close the transfer of a midfielder, who will be Barcelona’s third signing. The report does not mention the details of the player, but says their efforts to sign one is ‘not proving’ to be an easy task.