According to claim in the Spanish media, Arsenal have tabled an offer for Boca Juniors attacker Cristian Pavon.

The youngster is currently in Russia with the Argentina national team, and it’s likely there will be a scramble for the player when the competition finishes.

AS have reported on Arsenal’s interest in Pavon with claims the Gunners offered €30m for the winger in the winter window, and it’s now a question of waiting to see if they return and what others do.

It’s said at this stage the Premier League are the club most interested in the 22 year old, which would make clear the transfer plan still exists, as far as AS are concerned. 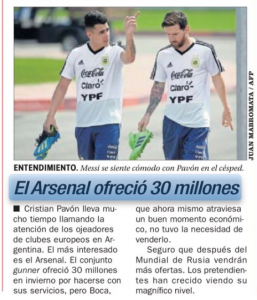 However, it’s expected after the World Cup offers will come in from other clubs, but Boca Juniors at it stands aren’t under pressure to sell Pavon due to their sound financial situation.

Pavon has made over 60 league appearances for Boca Juniors since making his debut in 2014. The player is contracted to the Argentine giants until June 2022, after extending his deal last summer.