When it comes to scouting, Premier League clubs seem to be very hot on Portugal at this moment in time.

Barely a week goes by in which clubs from England’s top flight aren’t at one, or several games in the country, and this week it was the turn of Southampton and Watford.

According to A Bola, both clubs had scouts in attendance to watch Aves vs Gil Vicente on Friday night, a game with the away side won 2-1.

The newspaper makes no mention of who either Southampton or Watford may have been there to keep an eye on; however, it is suggested that the ‘young players’ both teams have been using may be the answer.

Portugal is enjoying the emergence of plenty of young talent, and perhaps they were there to see if there’s any on offer at either club. 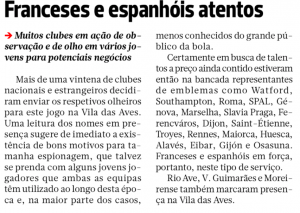 If that is the case, they are likely to have been impressed by the performance of 22-year-old Fernando Fonseca, with the Gil Vicente full-back earning a seven from A Bola for his performance.

Both Southampton and Watford could undoubtedly do with a new right-back, and his display is sure to have not gone unnoticed by those watching. Yves Baraye was another star performer, earning an eight for his two goals.