Home Europe Southampton and Watford keen to formulate ‘loan without cost’ which may still...
SHARE

There’s now daily updates on the Nico Gaitan situation, as Atletico Madrid look to see the back of the player before the window closes.

With less than a week left before the end of the January market, time is running out and Atletico seem to be edging Gaitan to the door, encouraging him to consider options he wasn’t previously keen on.

The Spanish club may have to follow that lead and consider a loan, and that’s what Marca say Southampton and Watford have offered.

Both clubs have offered a ‘loan without cost’, which admittedly doesn’t sound like the most attractive proposal Southampton and Watford could have made. 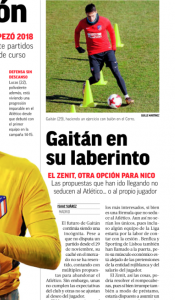 None of the options really stand out now for a transfer, and the interest from the Premier League clubs is talked up as a real thing.

Southampton and Watford may not have done enough to ‘seduce’ Atletico but if the situation remains the same on January 30th, the no-cost loan offer could be more tempting.

This one may not be over just yet.