Jordy Clasie’s future is very much up in the air, and it may be a situation which drags on through the summer.

Unable to establish himself during his first spell at Southampton, there will be doubts whether the 26 year old can have a Premier League impact for the Saints next season.

Clasie wasn’t a runaway success this season in Belgium as Club Brugge won the title, but Gazet van Antwerpen suggest that doesn’t rule out a stay.

It’s something to ponder, but it’s stated that given Clasie’s role there’ll be doubt whether signing him permanently, or on loan again, is worth the ‘expensive commitment’.

Monday’s edition of De Telegraaf carried an interview with Clasie, and the Dutchman was quoted as saying: “In principle I return to Southampton. My contract runs for another two years. I will talk to my wife and my agent about what we are going to do next season. It is still open for me now.” 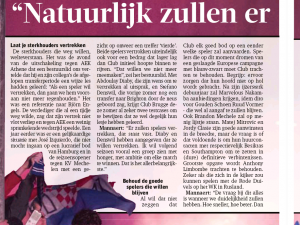 There’s been no reports recently in either Belgium or the Netherlands about wider interest for Clasie and it could be that the midfielder and Southampton have to wait a while for interest to present itself, or instruct the player’s agent to go out and find it.