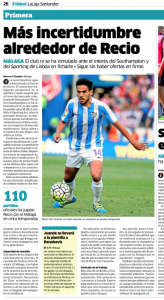 Marca have a story in their Friday issue on the future of Recio. The 25 year old Malaga born Malaga player, has apparently been attracting interest from several clubs.

Southampton are once again linked, after an earlier report at the end of last month. Those claims seemed to have originated in the English media, and Marca don’t say they’ve checked it themselves.

What Marca have found out independently is that Portuguese club Sporting are interested in the player. The Spanish newspaper believe a ‘major effort’ is expected from one of the interested clubs to sign the player.

Recio is a right footed central midfielder who came through the Malaga youth system, left, and then returned to the club. An exit isn’t nailed on by any stretch of the imagination and, despite repeated claims of interest, nobody has submitted a bid.