It’s hard to tell who is currently in the lead to sign Axel Disasi, since the story seems to change by the week.

All we know is that both Wolverhampton and Southampton are actively pursuing the player, with Nuno Espírito Santo’s side reportedly putting forward a €15m bid.

As for the Saints, they are definitely on the lookout for a centre-back, since they are also making moves for Mohammed Salisu, currently at Real Valladolid.

What appears to be the issue, however, is their reluctance to pay over the odds for these players, as their offer for the La Liga defender wasn’t enough to trigger his release clause, and they don’t appear willing to meet Stade de Reims’ asking price of €15m for Disasi.

If they aren’t careful, they are at risk of being overtaken by the competition, like AS Monaco, whom L’Equipe report met with the player’s entourage ‘very recently’. 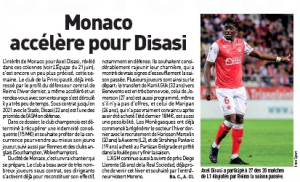 Southampton are once again reported as being interested in the article, alongside Rennes and Wolverhampton, and Reims are hoping all this competition might increase the final price a bit, maybe beyond their hopes of €15m.

Either way, Ralph Hasenhüttl’s side are still lurking, but they just need to make their move.