Manolo Gabbiadini’s agent Silvio Pagliari isn’t too happy with Corriere di Bologna after the Italian newspaper twisted some comments he’d given them.

Gabbiadini has been repeatedly linked with Bologna recently, and Pagliari was quoted as saying he’d be more likely to consider the move if the Italian club could show serious aims to get into the Champions League, and give assurances about a new stadium.

Pagliari has since taken to Twitter to deny those comments, explaining he actually said Bologna would have to show ‘a project ambitious in the medium and long term’.

He’s clearly not ruling out the possibility of a transfer and that’s understandable, Gabbiadini didn’t leave Napoli to sit on Southampton’s bench and if he’s going to be playing back-up to Guido Carrillo then a move makes sense.

That move may not be back to Italy, with the agent saying: “First of all, it should be emphasised that Manolo is in the Premier League, where he is doing well even if he does 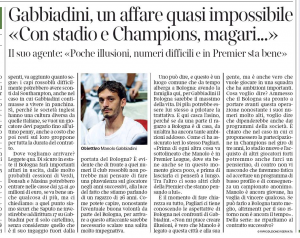 not play at the moment, and before leaving he will think about it for a long time. Among other things there are other clubs of the Premier who are thinking of him.”

Whilst selling Gabbiadini to another Premier League club would give Southampton the best chance of a good fee, it could also be dangerous.

The last thing the Saints would want is the Italian banging in the goals elsewhere in England, and potentially at a direct rival for whatever Southampton are fighting for next season.