Cedric Soares has been speaking to the Portuguese media during international break, and that of course means the Southampton player was asked about leaving the club.

Being an experienced Portuguese international, many in Cedric’s home country believe he should be aiming higher than where he currently is, especially with Southampton finding themselves in a relegation battle this season.

Portuguese newspaper A Bola put it to Cedric that he’s represented three clubs so far in his career, and then asked him when the fourth will come.

Not answering directly, Cedric made it clear he’s considered leaving the club but won’t force his way out for just any transfer: “I had proposals to leave Southampton, it’s normal. Playing at the highest level, and with the victory in Euro 2016, they appeared, but I renewed. After the Confederations Cup, me and Van Dijk were negotiating our exit, but with the Southampton sale process it was established that no exits would be allowed.

“And that showed us that we were important to the club. Van Dijk then ends up going to Liverpool because the value was too high. On this, I’m a loyal player. I want a dream team, but if it’s not a dream I don’t know if I’ll consider the Southampton exit.” 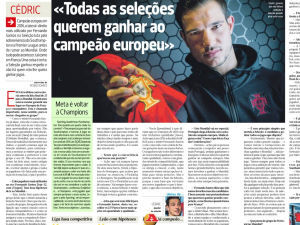 O Jogo then put it to Cedric that he’s already played in the Champions League, with Sporting, so surely must want to experience that level of football again: “A player always wants to aim for that level. I played for Sporting, I know the responsibility, I know how I enjoyed these games and the fact that we hear that song, I have that goal.”

It sounds very much that Cedric quite fancies a move to a club closer to the top of the table, but he’s aware Southampton won’t make it easy.