Both Southampton and Sheffield Wednesday had scouts watch Benfica against Vitoria Setubal on Saturday. They were two of three English clubs who has spies in the stands, with Manchester United also having someone present.

The Old Trafford club watch almost every game of Portugal’s bigger clubs so that’s neither here nor there, but Southampton and Sheffield Wednesday may both have more specific plans.

Southampton really picked up their Portugal scouting under previous manager Ronald Koeman, who had previously been in charge at Benfica. For Sheffield Wednesday it was of course Carlos Carvalhal who decided window shopping in Portugal would be the way to go forward. Both clubs have continued since those managers left. 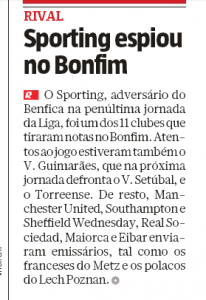 Benfica won the match 2-1 and Raul Jimenez had a really good game, scoring two goals. That’s something of a rarity for the Mexican, who Benfica have been trying to sell for several windows.

Although asking prices have been set as high as €50m, there’s no way Benfica would get that and something around €20-30m seems fairer.

There’s no indication of who either club were watching directly.