Southampton haven’t stopped their routine transfer window shopping in Portugal, despite the change of manager. Having worked in Portugal himself, for Benfica, Southampton’s presence in the country seemed to beef up under Ronald Koeman.

Cedric Soares joined the club last summer after Southampton had spent some time following the defender, and the focus is still on players in Portugal. 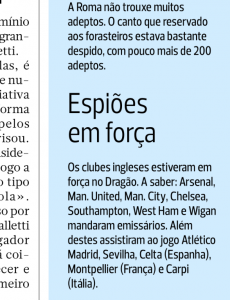 On Wednesday night, Southampton had an official watch the match between FC Porto and AS Roma, a Champions League qualification game.

It was a good chance for Southampton to watch Porto players have a tough test, and also eye some of those from Roma.

The result was 1-1, so everything rests on the second leg. Portuguese newspaper A Bola has the list of visiting officials, and they’ve also rated the performers.

Based on last night’s match alone, it’s unlikely Claude Puel will be rushing through a purchase before the window closes.