Despite claims that an offer has been made, Southampton don’t seem any closer to signing Mattias Svanberg from Bologna.

That doesn’t mean the Saints aren’t interested, but the Serie A side are still waiting for someone to give them the money they want so they can use the money to their own benefit.

This is, in essence, what Corriere dello Sport state, claiming the Sweden international ‘will have to leave’, since he has ‘no intention of renewing his contract expiring at the end of June 2023’.

A sale this summer means they can still make money from his departure, and a few Premier League teams, ‘with Southampton appearing the most interested’, following him. 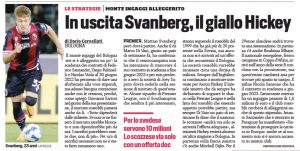 However, ‘an offer that satisfies Bologna has not yet been put forward’, as the Italians ‘would like to collect about €10m’.

If you missed it, it was claimed around a week ago that Southampton had made a €6m offer for the midfielder, but that had been deemed insufficient.

Talks were going on on the 22nd of June, but there hasn’t been much to update on since then, meaning the Saints could simply be biding their time, knowing full well Bologna need to sell and could be willing to accept a lower price a bit later on in the transfer window.