That’s according to Diario La Grada, who say sources ‘close to the player’ have ‘confirmed in recent days’ that a move to Saint Mary’s is on the cards.

Salisu has been heavily linked with a move to the Premier League for several months after an impressive first season in La Liga with Valladolid.

Southampton have been named as suitors on more than one occasion but appeared to have missed out on his signature in the last few weeks, with a move to France looking increasingly likely.

However, it appears they have now managed to turn that around, and Salisu will be making the South Coast his new home.

Grada report that sources close to the player have told them a €12m deal is done and that he ‘will leave’ to join Southampton this summer. 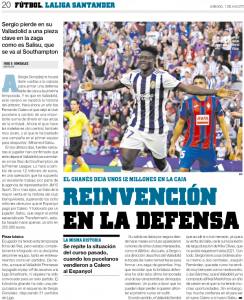 The deal is seen as ‘excellent work’ for his representatives JM10 Sport, who have not only managed to put their client in the Premier League but secured a club-record deal for Valladolid in the process.

When the deal will be finalised isn’t mentioned, nor is there any details regarding Salisu’s contract at Southampton but the point is clear, a deal is done, and he will be joining Ralph Hasenhüttl’s side.