The latest claims in Portugal say Newcastle United have been left behind in the race for Ruben Semedo.

A Bola has a story today saying Southampton have now made a decision regarding the player, and will make an acceptable offer before Newcastle do.

The demands for both clubs are the same: Sporting have asked for €14m, and included two clauses. One means they’ll get 20% of a future transfer, and the other blocks Semedo from joining Porto, Benfica, or Braga in the next few years, otherwise there’s a €30m fine. 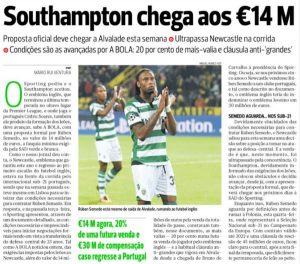 Newcastle United promised Sporting an answer this week, but A Bola say that on Sunday, Southampton pushed themselves ahead and already said they’ll accept the conditions. The official bid from the Saints is expected to be made ‘in the next few days’.

What A Bola seems to ignore is the possibility that Southampton and Newcastle both make the same offer. Who would Semedo choose then?

It’s worth noting that last week there were claims in Portugal that Southampton would trounce Newcastle’s offer before the end of that week. They didn’t.