Later that day, Galicia Press explained the midfielder is ‘seduced’ by the idea of joining the Spanish side and if he fails to leave the Saints in the winter market, he will run down his contract. The 28-year-old’s current deal expires after the end of next season.

Celta allowed Stanislav Lobotka to join Napoli in the ongoing window and are in the market looking to bring in a replacement for him.

Their manager, Óscar García Junyent, knows the player from their time at Barcelona’s academy.

Mundo Deportivo have a short update on reports linking the former Chelsea man to the La Liga side and it’s claimed the Spaniard’s high wages are a ‘problem’ for Celta to sign the player.

Beijing Renhe’s Augusto Fernández is considered as another an option for Celta. 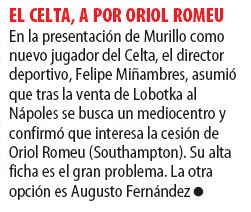 Celta took Jeison Murillo on loan from Sampdoria and he was presented to the media on Thursday.

The club’s sporting director Felipe Miñambres was also present and was asked about reports linking Romeu to his side.

“If everything was as easy as friendship… Everyone here defends his own. Things with that club are not easy,” Miñambres mystically said, as quoted by Mundo Deportivo.