According to claim in the Italian media Fiorentina will target either Southampton’s Manolo Gabbiadini or Sevilla’s Luis Muriel in the next transfer window.

The Southampton player has been linked with a return to Serie A in recent months.

Corriere dello Sport report Fiorentina are looking to bring in a forward in the new year as they hope to secure a place in Europe for next season. The Viola have a realistic chance of grabbing fourth place in this campaign, but more goals are needed from the team say the Italian newspaper.

The Florence club are hoping to get loan deals for either Gabbiadini or Muriel in January, with both forwards currently out of favour with their clubs.

This isn’t the first time Gabbiadini has been linked with a move to Fiorentina following recent claims the Italian side, along with Bologna, are showing an interest.

The Italy international was dropped from Ralph Hasenhüttl’s squad during Southampton’s recent victory over Arsenal, leading to speculation over his future with the Premier League side. 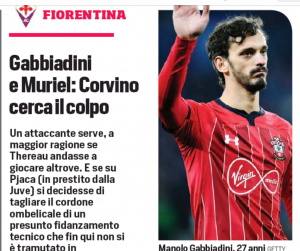 There was reported interest from Italy in the last window, but the player remained with the Saints.

“If Watford want me to stay…” – Hornets star talks about next season, ‘failed’ his PL mission

“If Watford want me to stay…” – Hornets star talks about...