Home Europe Southampton player now acting for team “and not just himself”, been through...
SHARE

Pierre Emile Højbjerg and Denmark manager Åge Hareide have had a strained relationship.

The Southampton midfielder manager to annoy his national boss through his attitude both on and off the pitch, and Hareide took the step of speaking about it publicly.

Højbjerg was left in no doubt, he either had to change his approach to the Danish team, and perhaps football generally, or forget about an international career as long as Hareide was in charge.

Making the right choice and doing everything he can to show his manager he’s matured as a footballer and person, Højbjerg is now back in the national fold and again the manager is speaking about him.

It’s much more positive this time, and Hareide is quoted by Ekstra Bladet as saying: “Pierre Emile Højbjerg has managed to act for the team and not just for himself. he’s become a grown boy.

“Even when we had him inside the squad before the World Cup, I could see that he has grown both on and off the pitch.

“The time in Southampton has been a bit turbulent, but now he has recovered. He has added several dimensions to his game. I think he has been in a positive development over a long period of time. 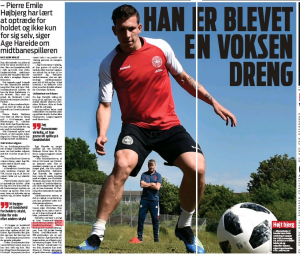 “I really sense he wants to play on the national team, he has also expressed his wish to return.”

Southampton are currently 16th in the Premier League and Pierre Emile Højbjerg has been an important player for Mark Hughes so far this season.

From Brazil: Everton tell Botafogo that an offer is on the way for 18 year old

Rangers offer for player backed up – Steven Gerrard’s side need...

Chelsea player has agreement with club for move – Blues potential...

From Brazil: Everton tell Botafogo that an offer is on the...